I don’t know when exactly I had the light bulb moment.

But I definitely had it.

But there’s paying lip service, and there is actually investigating it.

When is the last time you checked how organized your funnel is at handling what I call spillover? The summer is a perfect time to take a look. You (hopefully!) have an enrollment communications flow for underclassmen. A sophomore or junior can’t apply yet, so your traditional inquiry flow won’t work. But a heavy emphasis on visiting and exploring your majors? Now we’re cooking.

You may, just as I’ve made in my role as an enrollment communications director, create a piece or three to mail to those students.

Perfect! You’re getting more segmented, and you are giving younger students information that directly applies to them. You rascal.

Except now that bright-eyed junior is entering their senior year. Heck, they may have even submitted an application in late summer, so now you’ve got an applicant on your hands.

Is your funnel ready for that? Because if you aren’t careful, this scenario could happen:

Andy is a 16-year-old junior who submitted an inquiry to your college in the fall of his 11th grade year. He’s on top of things! You send him a viewbook, invite him to a junior open house, and send him a few emails as a general overview of your college. He’s interested, and keeps you on his list.

Except your junior funnel is now over, so he hasn’t heard from you in a few months.

And because he’s not a new senior inquiry, he’s either:

Does that sound eerily familiar to you?

One way to handle this in your CMS is create spillover categories. One track is for students who are new inquiries (or prospects) in that grade. As an example, a senior inquiring for the first time gets your introductory email flow following by app generation.

But another track is for senior spillover. Those are students who already were in your system. You skip the intro emails, and adjust the app generation emails to convey the fact they already know who you are, and that you appreciate how long they’ve shown interest in your school. Otherwise, it’s like going on a series of dates with somebody for a year, you go away to summer camp, and when you see them at school in the fall you introduce yourself and ask if they’d be up for going on a date.

Use the summer to your advantage. Think through what students will get next once they are done with any particular series of emails, print pieces, or phone calls.

You can do this a few easy ways:

Remember, an enrollment communications flow isn’t a flow if it goes down to a trickle. You could have everything going smoothly and forget that the road doesn’t end just because you have “completed the junior flow.” They still exist. Just in a different grade. Andy Shaw is the director of enrollment communications and operations at York College of Pennsylvania, a private four-year residential school. He also is a speaker, columnist, comedian, and father of three toddlers. 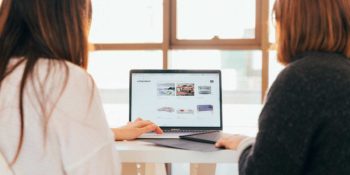