17 Top Evernote Alternatives for Note-Taking for 2023

17 Top Evernote Alternatives for Note-Taking for 2023

It was a cold and joyless day when I saw Evernote’s new pricing policy.

A part of me died. The days of conveniently syncing across my Mac, phone and iPad? Gone.

Whether it’s the price increase, new tiered feature limitations, or something else entirely, all that’s left to do now is shop around to see what else is out there or cough up the dough. And to cry. Or to nod with understanding, deep down knowing that these business things do cost money.

If even its free version is a solid contender to Evernote, it’s listed here. Some of them have unique features that make them a bit different, but just as functional. And who knows? You might even find something a little different you end up loving even more than Evernote.

Even an Apple gal like myself can admit that Apple’s note-taking app Notes has never been a worthy contender in the note-taking space. Until the updates Apple released for Notes last year, that is.

As someone who lives on almost all other Apple apps and loves that they sync across my 4 devices, it was heartbreaking the day I realized Apple Notes wouldn’t be enough.

But as Notes continues to get stronger and Evernote continues to get weaker—ahem, no more syncing across more than 2 devices—Apple fans can rejoice as they migrate back over to Notes, and hopefully for good.

If you’re all about collaborative workflow but weren’t entirely satisfied with Evernote’s collaborative features, Box Notes is for you.

It’s powerful and user-friendly for everyone, but especially on an enterprise level and especially if your team relies heavily on salesforce.com, one if its many available integrations.

Dropbox Paper is the new kid on the block, and while everyone’s saying this new kid is picking a fight with Google Docs, I say it’s a solid competitor for Evernote as well

Here are the basics.

Obviously this one will make a lot of sense for you if you’re already a big Dropbox user.

If you need lightweight and beautiful team collaboration, then Notejoy is for you. It’s available on web, PC, Mac, and iPhone and has built an impressive set of collaboration features that take it to the next level beyond Evernote. You can edit notes together in real time, have threaded comment discussions, @mentions, and even react with emojis.

It’s free to use for teams across unlimited devices, and offers an upgrade option for teams over 10 or advanced features.

If you need fast, simple, and plenty of functionality on the surface, Google Keep will be plenty effective for you.

If you need something complicated enough to organize an extensive library of media-rich notes that’s more kin to an archive or database, Evernote is probably still your one true note-taking love.

Of course, Google Keep integrates seamlessly with other Google apps, so it might be a no-brainer for you if that’s where you and your team are already spending a lot of your work hours.

INKredible is for the romantics who love the effect of pen on paper but don’t necessarily dig the hardware and messiness that comes with it.

It’s mostly for people who get the most use from their note-taking app on a tablet and like to write with a stylus or finger, so if you ever found yourself disenchanted with Evernote’s text-centered interface and want something a little bit more handmade, INKredible’s for you.

Laverna is the open source alternative that lets you host all your notes privately, which is great for those of us who feel like we’re being watched by the FBI. And if markdown’s your thing, good news: Laverna’s known for its robust markdown editor.

Head over to LifeHacker for a well-written and very in-depth comparison of Microsoft OneNote and Evernote.

Microsoft recently removed all of OneNote’s Premium feature restrictions, meaning you can get the whole enchilada completely for free. I daresay OneNote will soon cross paths with Evernote and overtake it as a widely-used note-taking app if they both continue in their current trajectories.

The more visually pleasing Evernote alternatives I see, the more disenchanted I become with Evernote’s cluttered green and gray interface. Nimbus Note is another solid contender, and not just because it’s pretty: it does just about everything Evernote does (even web clipping!)—the only most notably missing feature is workflow collaboration.

So as for you and your team at work? Steer clear. But if you’re often taking notes away from work and want something simple, it’s for you.

Quip is robust and pretty. Like Box Notes, it’s great for those who need powerful workflow collaboration, but it works great on a personal level, too. In Quip, notes can be documents, spreadsheets, or team chats, all of which can be organized into folders.

Does your team rely heavily on productivity tools like word processing and spreadsheets? Then this one’s for you.

Available across all platforms (including web), Simplenote works best for people who like—well, simple.

What does it do? Its job, simply. If you’ve found yourself not needing a lot of the extra features Evernote offers and value accessibility over bells and whistles, Simplenote really could be enough for you.

I was wary about including Tomboy on the list simply because it’s very stripped down and not very visually pleasing, but it is very much free. It’s open source software from the GNOME project, a wonderful non-profit organization that believes in free software for all.

If your note-taking needs are basic, don’t worry—Tomboy’s got all the basic features you’d expect from a solid note-taking app.

WorkFlowy is hardcore simple and that’s what most people love about it. If you’re a list lover, or if you’re one of those evolved people that truly believe everything’s better in an outline—first of all, let me say: you’re right. And secondly: WorkFlowy was made for you.

What separates Workflowy apart from some of these other apps is the incredible community that has built up around it. People use it not only for its note-taking capabilities, but for its simple (yet intense) outline features. There are hidden 3rd-party apps, integrations and browser extensions galore. There’s even a whole book on what you can do with it.

And it’s interface? Simple and lovely. Are you tired of hearing me say how much I love good UX design yet?

Why switch to a paid option when Evernote’s recent price change is what’s having people looking to switch in the first place?

Two reasons. One, Evernote’s price change wasn’t the only disconcerting news; fact is, even after some restructuring and the price model change, they’re not quite out of the woods yet. It’s natural that you’d be wary of putting all your eggs (or notes) in a basket that could disappear sometime in the next 10 years.

And reason two? It could be that one of these apps was the note-taking soulmate you never knew you had. For a long time Evernote was just the biggest kid on the block—the big kid that could’ve kept you from noticing the little nerd in the corner that would’ve been a better match for you all along.

I have a lot of experience with DEVONthink Pro. Here’s the gist of it:

It’s only available for Mac and it’s really only for EXTREME note-taking and document-hoarding nerds. If that’s you, trust me—you’ll love it. Rock on, nerd.

It’s not just visually pleasing, it’s also got a kickass name. Falcon users can write in markdown and enjoy live previews as they write. A beginner at writing in markdown? No worries—Falcon’s Markdown Helper guides you each step of the way.

Most people have heard of Scrivener and know it’s the most powerful writing program on the block. Yes, writing–not necessarily note-taking.

But I’m including it here for the poor souls who—like me, back in life before Scrivener—used to organize my longform book notes and outlines on Evernote.

If your notes have anything to do with any type of writing: outlines, notes on drafts, brain dumps on story ideas, blog posts, scripts, essays, anything like that—you should migrate all of it to Scrivener.

It’s incredibly powerful and there’s really no better way to organize all notes writing related, even if you end up using it in tandem with another notes app like I do.

Maybe you don’t need to switch, but you should know what’s out there.

As for me? I’ve made the big move to Apple Notes and I couldn’t be happier. Turns out, simpler is better for me and I like using my note-taking app more on a personal level instead of collaboratively anyway.

I’m finally happy about my note taking situation and I didn’t realize it until a few months ago that I’ve been unhappy with Evernote for a looong time. How about you?

Switching over a thousand notes can be cumbersome and frustrating. But it can also be a huge relief when you know you’ve finally found the right place for them.

Will you make the big move? Where will you take your notes next?

Diana Asbury is the Head of Marketing at Workzone. In this blog, Diana writes about project management, leadership, and marketing. She believes life is more fun when you have a lot to look forward to – at Workzone she’s able to live out her planning dreams every day. 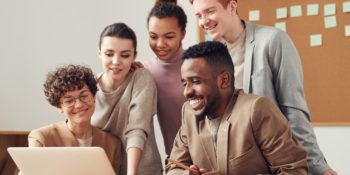